Scales and Chords In Various Tunings 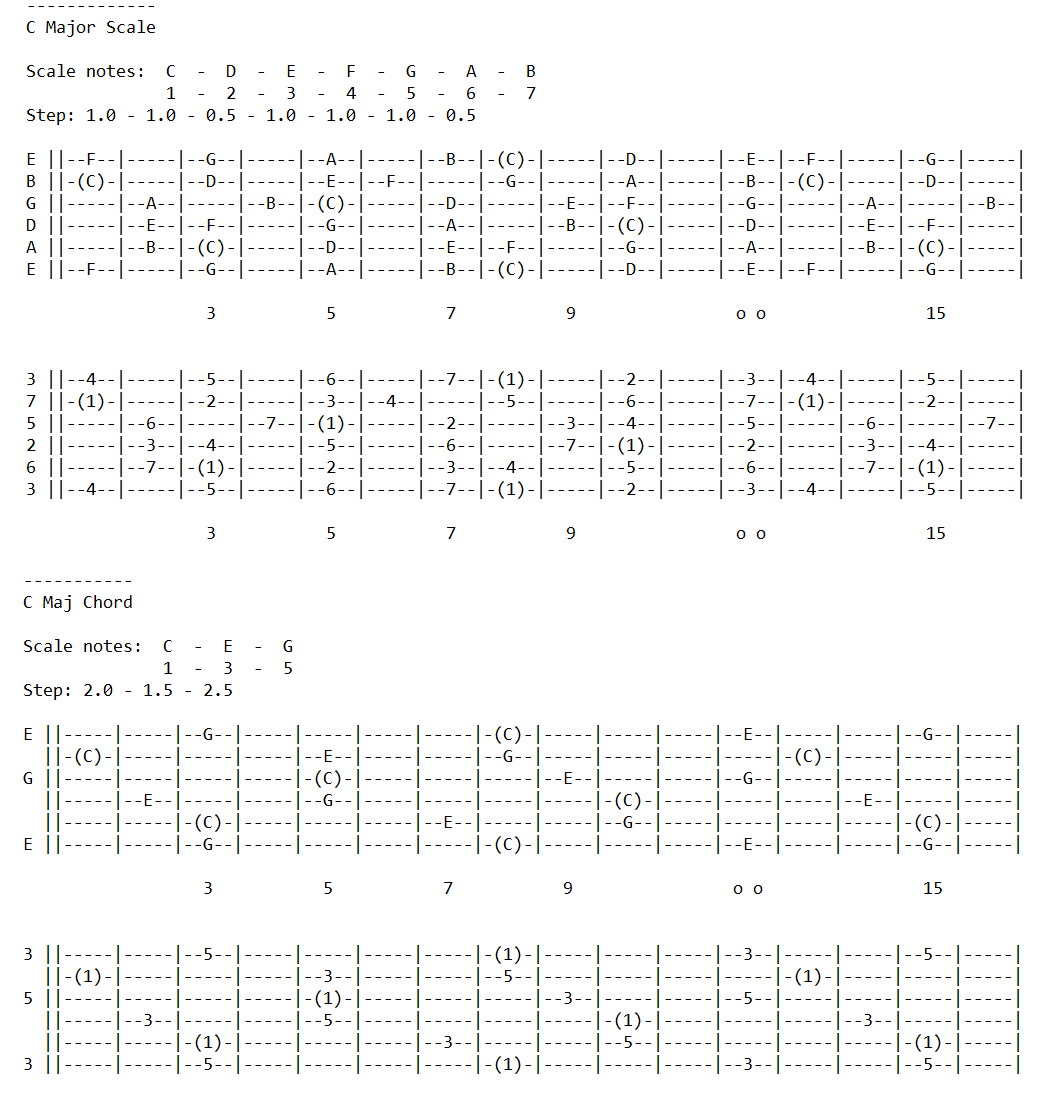 Instead of writing out guitar tunings using the note names for each string Joni herself uses a notation system of the bottom (lowest pitch) string followed by the fret numbers which you play to tune the next highest open string. For example for a 6-string guitar in standard tuning she would write:

What this means is instead of notating the names of each of the open strings, Joni Mitchell describes the tuning [E, A, D, G, B, E] as consisting of fourths and a major third. Fourths (P4) are represented by 5 semitones between strings E-A-D-G and major thirds (M3) are represented with 4 semitones for G-B, follwed by a fourth (5 semitones) again between B-E.

Joni's system of tuning notation makes comparisons between different tunings much easier by helping us find open string tuning 'families'. For instance, if you tune all strings a half step down to [D#, G#, C#, F#, A#, D#], the formula [D#, 5, 5, 5, 4, 5] reveals the same tunning pattern as standard tuning with the exception of the lowest string.

Playing scales or chords you are accustomed to in one tuning can be difficult to play in unfamiliar tunings. If you are looking for a very simple, bare-bones text file document that you can take with you anywhere with the important scales and chords for guitar in various tunings, then this is the right place. Print it out with your home printer or open it on your screen as you practice the scales or chords.

The file shows the notes and intervals of the scale on the fretboard up to the 16th fret. The root note is circled so you can orient yourself to the selected key. There are text files for several instruments such as guitar, 5-string bass, ukelele, and mandolin in standard tuning. Other tunings can be added on request.

The following common 16 scales and 14 chords are included in the text file in 12 keys for each of the provided tunings. Download a free sample of major scales and chords for 6-string guitar in standard tuning to try before you buy. Look in the "Buy" column in the tuning dictionary to see if the scales and chords are available.

Visit Joni Mitchell's page discussing her tuning notation. Bill Sethares has a pdf document where he shows how the C major, C minor and G major scale looks like in various tunings as well as various chords, however my files are more comprehensive as they contain 12 keys as well as more scales and chords.